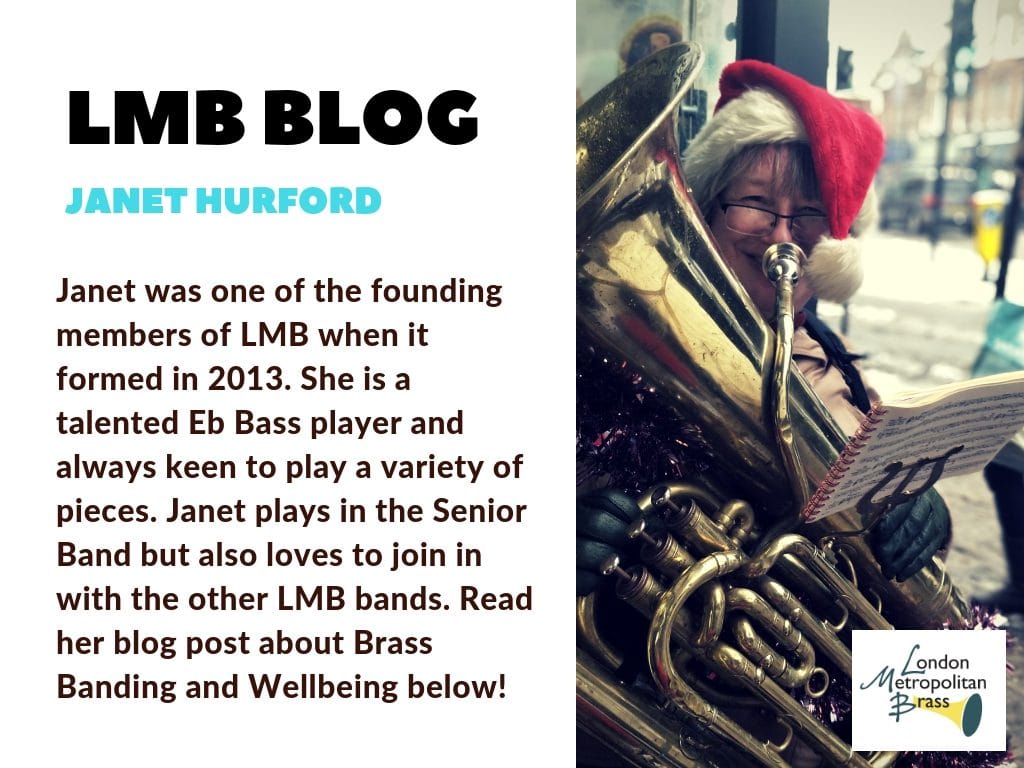 “Interesting fact: The world wide web (ok, well Google but that’s the same thing isn’t it?)  has eleventy billion articles  and research projects on the positive correlation of choral singing and wellbeing. Wellbeing and brass banding? Two. And one of those didn’t find any correlation at all.  The other one did:

Department of Music (University of Sheffield) Dr Michael Bonshor and Dr Victoria Williamson have been exploring whether similar benefits are associated with band brass playing.
In collaboration with Brass Bands England, they surveyed 346 players, and over 62 per cent reported that brass band playing has positive effects upon their mental health. Benefits include improvements in cognitive skills, psychological resilience, self-esteem and confidence, alongside reductions in stress, anxiety and depression. Playing also encourages positive emotions; the most commonly used words included ‘happiness’, ‘joy’, ‘relaxation’, ‘calm’, ‘satisfaction’ and ‘pride’.

If my maths is correct, I’d love to know what 38% reported…

So given the above, let’s look more closely at how brass banding can improve our wellbeing and bring some awesome health benefits:

All that focus on black dots blots out anything else and leads to total mindfulness. Let’s be in the moment. Ignore distractions (eg. MD- all that arm / stick waving is not at all mindful when trying to focus on black dots that you could swear you’d never seen before even though it is in fact the ninth rehearsal). 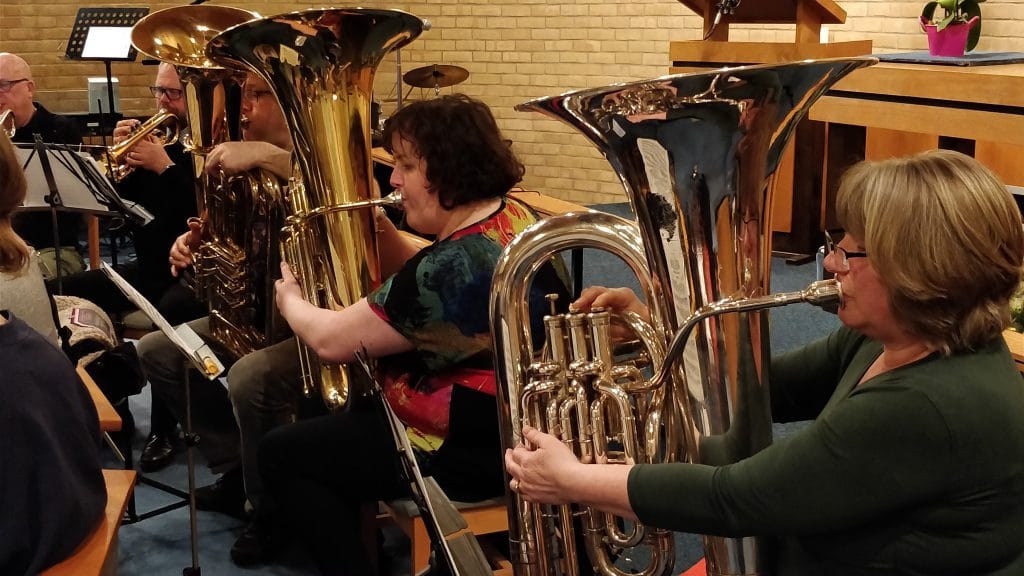 You can mindfully, slowly, carefully savour the post-rehearsal pint. Every millilitre of fluid bringing relief to the parched desert of throat and lungs. Well, lungs not so much – that just leads to choking. Which is in no way good for health. Alternatively  you could just chug it down and get another one in. Or better still, mindfully ask your mate if they’d mind getting another one in.

Ditto a cuppa in the break. With added blowing to cool the damn thing down before some Napoleonic Wannabee says you’ve got to sit down and recommence your mindful playing.

It is a truth universally acknowledged … as Jane Austen did not go on to say…that  being outdoors in the fresh air brings multiple health benefits. Although less so when you’re only five minutes into a two hour gig at a charity fete and forgot to ask the organisers for a gazebo. And even if you had remembered to request said gazebo, it wouldn’t have provided much protection against the Force 7 hoolie blowing somewhat harder than your misery guts bari & euph section.

Carting an Eb bass around brings no discernible benefit to the health of one’s back. It does however impact greatly on one’s wellbeing when arriving at a rehearsal /  gig because everyone is just soooo pleased to see you’ve actually made it. On the bus. With an Eb bass. Just sayin’. You may substitute Bb bass & percussion here.  Nothing else. Unless you are a star soloist and then it’s just general relief that nobody else has to step in and muck it up.

Any self-respecting article on Mindfulness will twitter on at length about the benefits of breathing. Really. As if not breathing was an option. Usually along the lines of “Inhale for the count of 6, hold breath for 7, exhale for 8”  Do try it at your next rehearsal and let us know how you get on with the ‘hold breath for 7’ instruction. But the good news is that you can totally reap the health benefits of inhaling and exhaling. Yay ! It’s what we do.”

Any cookies that may not be particularly necessary for the website to function and is used specifically to collect user personal data via analytics, ads, other embedded contents are termed as non-necessary cookies. It is mandatory to procure user consent prior to running these cookies on your website.